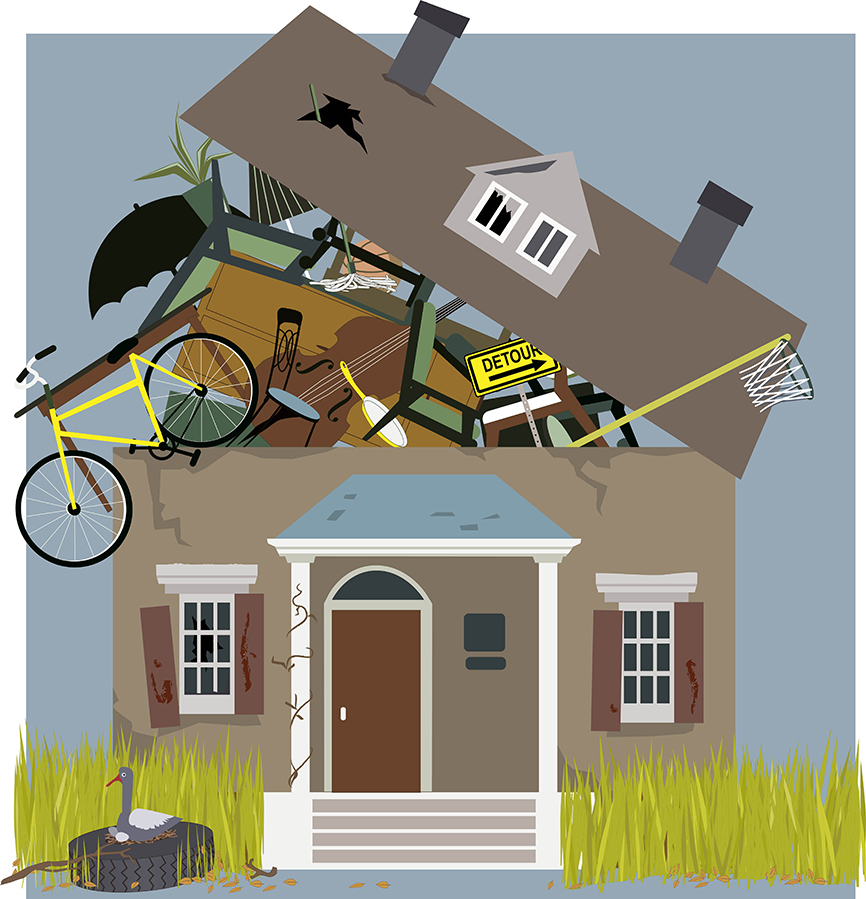 Many older adults hang on to things some of us would consider rubbish, but caregivers may be wondering when does clutter and untidiness turn the corner into a hoarding disorder?  According to the OCD Foundation, homes that are in chaos, with blocked exists and rooms that cannot be used as intended or do not allow the resident to move around easily are warning signs of true hoarding.

At times, the move of a parent or other family member into long-term care can be motivated by a home that has fallen into squalor.  The American Geriatrics Society reports that some forms of dementia and mental impairment can cause elderly hoarding or Diogenes Syndrome.  Elderly people with senile squalor syndrome, can become neglectful of themselves, withdraw socially and compulsively hoard junk and even garbage.

Seniors who live in homes filled with clutter may suffer from health problems stemming from an inability to keep track of medications, maintain personal hygiene or move safely about the home. Whether hoarding stems from collecting garage sale treasures and newspapers,  holding on to things for sentimental reasons or excessive shopping, seniors may have a fear of giving up things they might find a need for later.  Accumulating things can also be a way for older adults to fill the void of loneliness but can often lead to further isolation in an attempt to hide the problem.

It is estimated that nearly 5 per cent of Americans have hoarding disorder, a recognized mental health disorder; that’s about 15 million people. Common triggers for hoarding include the loss of a loved one or another traumatic event such as losing a job, serious illness or divorce.  Forcing a drastic clean-up or threatening to throw everything away will not help those suffering from this compulsive disorder.  But with professional help, living conditions and the underlying illness can be addressed.

Hoarders are often unable to see the benefit of getting rid of an object, but instead feel they may regret losing the item and end up putting off the decision.  Owning lots of things seems to give hoarders a sense of comfort and purchasing something new, even if they already have several similar items, offers a short-lived euphoria.  Seniors who were raised during frugal times may find it hard to part with things they feel could be useful, taking the “waste not, want not” motto to heart.

By removing items like outdated technology to a recycling facility and donating excess household appliances, clothes, dishes and books, seniors can feel they are not being wasteful and may be helping someone else.

If you are concerned about the safety and well-being of a loved-one living in a very cluttered home, contact their doctor for a referral to a professional.   Although there is no cure for hoarding, there are several successful treatments and intervention strategies. To learn more about hoarding disorder, visit http://208.88.128.33/hoarding/.