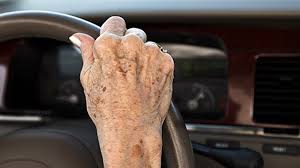 Recent changes to the Senior Driver Renewal Program in Ontario, Canada include a clock-drawing test as part of efforts to identify drivers over the age of 80 with cognitive changes that could put themselves and others at risk.

Researcher Brenda Vrkljan of McMaster University in Hamilton, has found that elderly drivers may not recognize their own cognitive decline and may continue to drive as health conditions, such as dementia, impair their abilities.  To drive safely, we need to be able to fully integrate physical skills with visual, cognitive and perceptual skills.   To flag older drivers who may be a concern, there are several tests performed at yearly driver renewal programs including the clock drawing test.

The clock face test uses higher brain function and can demonstrate problems with short-term memory and planning and is a better judge of how the brain is actually working than how well you can appear to function for a short period of time. It is sometimes used to determine the onset of Alzheimer’s disease.  Drivers are asked to draw the face of clock at a particular time of day and the results can reveal cognitive decline if numbers run off the circle or are jumbled.  For examples of the test visit the Alzheimer’s Reading Room at:  http://www.alzheimersreadingroom.com/2009/12/alzheimers-clock-draw-test-detect-signs.html .

While many seniors fight to keep their driver’s license to maintain their independence, mobility and social connections, it may not always be the best choice given the risks.  Besides teenagers, drivers over the age of 70 have the highest car collision rates when distance driven is considered, according to a 2012 profile of seniors’ transportation habits.   Seniors are also more likely to be seriously injured or killed in car crashes due in part to age-related frailty.

With the growing number of seniors in our population, the number of drivers on the road with dementia is expected to reach 100,000 in Ontario alone by 2028, according to an assessment of driving and dementia published in the Canadian Journal Of Psychiatry.

For an online driving screening test visit http://www.roadwiseonline.org/#GSMMSplash .  This evaluation is only meant as a preliminary step and should be followed up by a full evaluation with a doctor or driving rehabilitation specialist.